Home »Satire»Trump, the SOTU, Pelosi and a Shredder

Much has been made of the 2020 State of the Union debacle.

Trump (unsurprisingly) turned it into a campaign rally and filled it so full of lies that if we eliminated them all, it could be condensed to about 15 minutes instead of the 78 minutes he blustered through.

Wonderfully, Nancy Pelosi (I am not a fan) without saying a word, became the focal point of the event by systematically tearing up each piece of our Blowhard-in-Chief’s speech, right behind his back.  All eyes were not on Der Fuhrer, but rather on Nancy Pelosi as she ripped up this wad of lies.

But what would have been even better would be this:

1: Haul a LOUD paper shredder up from the floor and set it on the desk.
2: Uncoil a 25′ extension cord.
3: Plug the shredder into one end.
4: Drag the other end to the furthest outlet and plug it in.
5: Return to position and feed each sheet of drivel in separately.
6: Remove hopper from the shredder and empty it over Trump.
(or toss handfuls of it in the air above him like confetti)
7: Replace the hopper in the shredder.
8: Reverse steps 1-4 and smile. 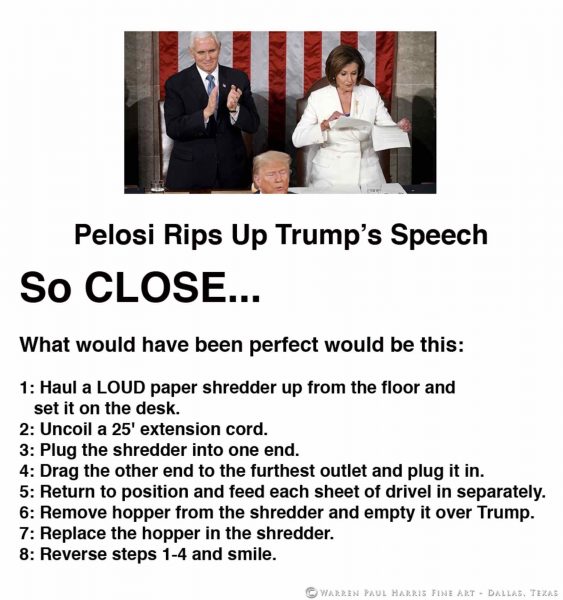