I have a bumper sticker that reads:

Stupidity Should Be Painful

Well for certain people it has been… 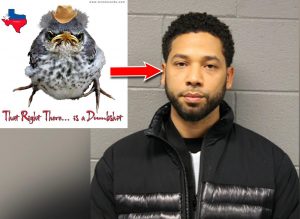 Recent news has inspired me to pick up where I left off from a previous post that referred to Toxic Greed. As I said before, greed in and of itself is not necessarily bad. If greed did not exist as motivation, there are probably infinite examples of modern conveniences and life saving / extending processes and medicines that would never have been invented. Greed inspires many brilliant people to pursue solutions for any number of maladies / problems that have beset mankind for eons.

If financial reward was not a motivator, do you think we would have artificial hearts, the stent, self-driving cars or joint replacements? Probably not.

What brought this topic to mind again, though is the slow-motion trainwreck of Jussie Smollett’s little PR problem. Initially we were led to believe Smollett who is both black and gay had been attacked by two white men shouting racial and homophobic slurs. When I first saw the photo of him and the original article I immediately thought “He looks pretty good for someone who was just beaten by a couple of racist white guys.” Don’t you think? Because every time I’ve seen news photos of gays who have been attacked out at night, they are in a hospital bed and they look severely beaten. So perhaps you can understand my confusion.

But as information comes in and the story continues to devolve into a very badly planned and executed soap opera, it becomes abundantly clear that Smollett is a pretty inept criminal.

As I’ve told more than one person over the years, “We don’t hear about the smart criminals.” We hear about the dumb ones. The criminals who don’t plan well, don’t execute well and who generally leave so many clues as to their involvement, that the next logical step would be to buy a 20 foot wide neon sign that says

With a massive flashing arrow pointing to their front door.

Smollett wasted the time and resources of Chicago PD in chasing down leads to a non-existent crime. Time and resources that could have been used to solve real crimes. And Smollett implemented racial and sexual bias to make himself look even more the victim. This is reprehensible.  And the reason for this is simply pathetic.   Apparently he felt underpaid.  Well just perhaps he was being paid what he was actually worth.  Based on the acuity shown in the design and execution of this ruse, his Empire salary my be far more than he is actually worth.

News stories on this topic state Jussie earned around $20,000, while co-stars Terrence Howard and Taraji P. Henson bagged around $175,000 per episode.  This puts our little miscreant’s net worth at a cool million dollars.  That’s not bad.  Sure he’d like to make more money, but wouldn’t we all.  Most self-respecting people faced with this situation do a number of things other than some half-backed scam that lands them in jail.  And gets them fired from a $20,000 per episode gig.

These are all things actually bright people would typically do.

You may notice that setting up a fake racially motivated beat-down doesn’t show up anywhere on this list.

And there are so many things wrong with this whole scenario it’s hard to know where to start.

From the beginning it just didn’t pass the smell test.

And then the facts start to surface.

The bottom line is he is a dumb as a box of rocks.  This is about the dumbest thing I’ve ever heard of.

If he really wanted to make all this look real, he could have wrapped a rope around his neck, run headlong into a wall, and then called 9-1-1 to get taken to the hospital.  Simple.  What a monumentally stupid waste of time and money – all so he can wind up in jail and become the pariah du jour.

He Paid Them With a Check!

What a complete Idiot.

All of this for what?

The kind that gets you blacklisted and sent to jail.

Plain and Simple.  He was dissatisfied with his pay, so he sat down, thought REAL hard.  And came up with this half-baked plan to get his name recognition jacked up.

Well he certainly achieved his goal, didn’t he?  Except this is more like a Twilight Zone version where he gets all the attention.  Just not the kind he wanted.