Here’s the thing about fame.

Fame can be a great thing.  It can open doors for you and make you rich.  It can make you a household name.  You can recognize this as so many stars and glitterati have, and be grateful for this fortuitous situation.  Or you can decide you deserve all the adulation and become smug and intolerable.

I have had the good fortune over the course of my life to meet and work with a significant number of famous people.  Out of college I worked at an electronics store in Burbank, California that was originally founded by Donald O’Connor.  As a result, the Hollywood elite shopped there frequently.  It was not uncommon so see Jerry Lewis, Chill Wills, Mickey Rooney or Cliff Robertson in the store.  Lorne Greene was a frequent flyer and it was in his Mandeville Canyon home where I did my first home audio installation.  That would have been 1972 or so.

I was in the music industry for twenty years, a roadie for the Grateful Dead and an engineer for Motown Records.  I’ve worked with Sly Stone, Ike Turner, all the people at Motown and a host of other mini celebrities and A-list creatives.

My observation over this vast span of time has been that the really cool people are acutely aware of how fortunate they are to be in this position.  That for every successful one of them there are thousands just as good – some better – who will literally never be “discovered.”  They realize that if they had not been at that magical Nexus point at the exact right time, they could be waiting tables today, instead of being hounded by the paparazzi.

This keeps them humble.  Approachable.  Cool.

And I consider myself fortunate to have known and worked with so many of these amazingly talented (and extremely nice) people.

And then there’s the flip-side of the celebrity coin. 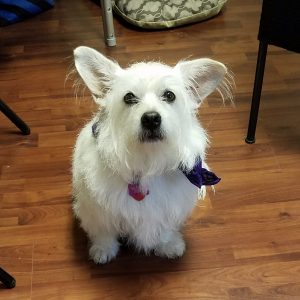 Fortunately this has been a small percentage of people in my experience.  You know the type.  The ones who think they are so very special.  That somehow they deserve all the adulation in the world and have no responsibility to be civil to “the little people” because they are so incredibly special (read: insufferable.)  I have only encountered this a handful of times in my many years on this planet, so I consider it to be an anomaly.  But then its not like I’m in Hollywood anymore, so perhaps things have changed.

It’s always a good idea to remain humble, no matter how much you think you deserve whatever position you’re in.  It’s like I tell my dog (Slick.The.Dog) every time I brush him:  “You never get a second chance to make a first impression.  And you never know who you’ll meet.”

And:  “You clean up good, little guy but never let that go to your head.  Always be humble.”

But to the actual point of this post now…

We have someone currently prowling the Oval Office.  The highest position in the land.  Someone who thinks he is entitled to anything and everything within reach.  Even a very distant reach.  Someone who classifies as a textbook sociopath.  As I’ve written before, we should expect narcissists in the Oval Office.  We should not expect sociopaths, nor should we have elected one.  That should have been obvious when the recording of Trump bragging about grabbing women by their genitals.  Every self-respecting “Christian” (actually Human) voter should have re-thought their choice at that precise moment.  The fact that they supported this man anyway says a lot about their conviction.

What are the traits of a sociopath?

Here are a few…

Does any of this sound familiar?

Feel free to Google this symptom yourself.

What isn’t in the list above, but frequently exists, is GREED.  Pure and simple Greed.

As Gordon Gecko pronounced in the movie Wall Street, “Greed is good.”  And to a certain extent it is.

Greed begets accomplishments.  Without greed we would not have iPhones, computers, Tesla cars or affordable (debatable) air travel and so much more.  Greed is the driving force behind capitalism.  There is nothing wrong with capitalism as long as the checks and balances remain effective.  Unfortunately in recent decades, the inmates have been running the asylum and capitalism has run amok in the United States.  But that is a topic for another time.

And greed is, actually, good.

Up to a point.

And then we have something I like to think of as Toxic Greed.

And that term should be (and likely will be (in future analyses) synonymous with Donald Trump.

The man is so unabashedly greedy (as is most of our current Congress) that it defies comprehension.

According to the Michael Lewis book The Fifth Risk, this is an actual conversation between Donald Trump, Chris Christie and Steve Bannon on the topic of the $107 million raised for his transition team.

This is the best example of Toxic Greed I have ever seen.  The man is shameless.   The sheer absence of ethics is astounding.  He makes Richard Nixon look like a rank amateur.

What our Fearless Leader fails to comprehend – and it should be obvious by now – is that he is poisoning his own name.  The name Trump used to be synonymous with “accomplishment.”  At one time, his new hotels proudly displayed his name in enormous letters.  But in the wake of an epic Presidential campaign, Trump hotels started being re-branded to insulate them from his toxic name.

Currently if you look up the word trump in a dictionary you get:

trump something up — invent a false accusation or excuse.

“they’ve trumped up charges against her”
Origin
early 16th century: alteration of triumph, once used in card games in the same sense.

In essence, up until a very few years ago, the word trump was synonymous with triumph, success, better than, a cut above, to better someone else.

But what will it mean in the future?

Well if the last two years are any example at all, this is what a dictionary search in years to come will yield:

1) To have had a bad experience
2) To be doomed to misery in the near future
3) Describing someone who is totally and utterly drunk and/or completely under the influence of one or more drugs beyond the point of comprehension, rationality and all response. They may be puking everywhere and/or behaving abnormally, influenced by whatever’s in their body. ‘Trumped’ is not usually referred to as a pleasant experience.
1) “Sam trumped me over again, man.  I can’t believe it”
2) “Aaagh! Somebody called the cops! We’re totally trumped!!”
3) “Dude, he is so completely trumped he doesn’t even know what’s going on. Help me get him to bed.”
And…

When nothing goes your way and there is nothing you can do about it.

guy #1:  “I just had the most life changing shit ever, I was pushing so trumping hard, all my blood went downstairs, giving me a boner, so I couldn’t piss straight, now it’s all over my mom’s bathroom.”

You would think any even remotely self-aware individual would want to avoid such a scenario.  Most people want to protect their good name, don’t they?  But not if you’re a sociopath.  Being self-aware is a prerequisite for having a sense of self-preservation.  But being a sociopath and being self-aware are two mutually exclusive conditions.
And so we come to our President.  Our Sociopath-In-Chief.  Donald Trump.  An embarrassment.  A man who cares absolutely nothing for anyone but himself.  If anything he does benefits anyone else, it is merely a coincidence.  A happy accident.  For the only thing Donald Trump cares about is himself.  Not even his name.  Just himself.  His sheer toxic greed has made his own name toxic, most likely relegated its use to an expletive in future generations and and the target of derision world-wide.
Sad.

If you don’t even look at his face and just listen to his voice, what you hear is someone who likes to place blame. The very tone of his voice has that ring of sheer arrogance and condescension.

If you actually watch him, the conceit is palpable.

This is why i didn’t watch the SOTU. I like my TV too much to have to take out the .44 magnum and shoot it.

Here’s a very interesting article exactly who Trump’s base is by Paul Street: 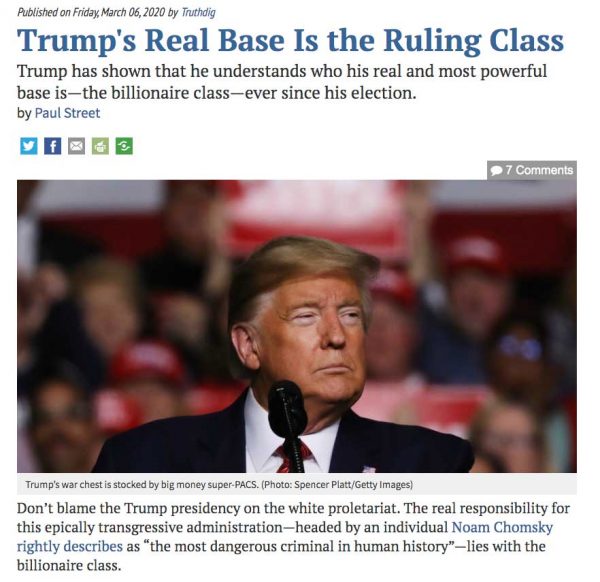 (not news to me, but it’s nice to have more and more professionals reinforcing what I’ve been saying for the last 4 years)

[Salon]   President Donald Trump’s maskless return to the White House on Monday following a weekend at Walter Reed Medical Center shows that he wants his supporters to “prove their loyalty to him with their lives,” Yale psychiatrist Bandy X. Lee said in an interview with Salon.

Trump, who is still infected with the novel coronavirus, took off his mask on the Truman balcony and saluted Marine One before entering the White House and possibly exposing a photographer and others around him. Trump suggested in a video that he may now be “immune” from the virus, even as his doctor warned that the president was “not be entirely out of the woods yet.”

Lee told Salon after the viral photo-op that it “would not be an exaggeration” to say that Trump “delights in putting people in danger.“

“Sociopathy is dangerous, in part because out of envy of other human beings for having human characteristics, it actively desires people to suffer and die,” she said.

Lee, a forensic psychiatrist at Yale School of Medicine who also taught at Yale Law School, is the author of the textbook “Violence” has worked on public health approaches to violence prevention for decades. She also edited the book “The Dangerous Case of Donald Trump: 37 Psychiatrists and Mental Health Experts Assess a President” and serves as president of the World Mental Health Coalition, which plans to release a video statement by “100 mental health experts” arguing that Trump should be removed from office and the 2020 ballot, because he is dangerous and unfit. Lee also plans to publish a “Profile of the Nation” on her website, which aims to provide a “full psychological profile of Donald Trump in the context of his followers and the nation.”

Trump’s behavior is not unlike the thousands of people Lee has treated in her career, she told Salon.

“Mental health professionals look at patterns, as human behavior is not random. This is why society charges us with preventing dangers to self and others before they happen, unlike law enforcement, which must wait until after things happen,” she said. “We are far more familiar with these situations, too. In my 20-year career of working with prisoners and violent offenders to help contain their behavior or to prevent their becoming violent in the first place, I probably treated a thousand individuals with [Trump’s] exact characteristics. So far, he has not deviated even the slightest from how I expected he would behave in a position of greater power than he can handle.” 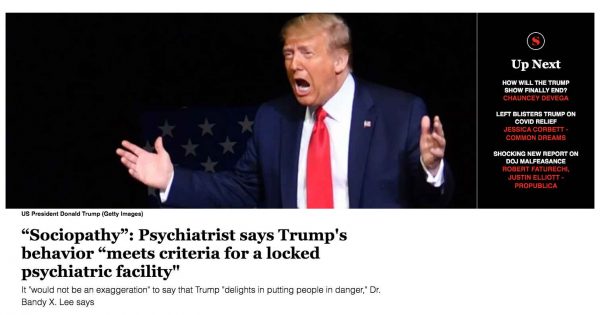