We have just ended the longest government shutdown in history.  And over what?  Donald Trump’s border wall.  He is determined to create a wall along our southern border with Mexico to solve what he perceives to be our biggest problems.  During his campaign he promised over and over again that Mexico would pay for the wall.  Absolutely NO adult capable of critical thinking believed this.  Over the last 2 years he has walked this back further and further from the original statement(s) until it is now forcing US citizens to fund it (even though a vast majority do NOT favor a wall) and in a fit of pique, shut down the government for over a month.  Furloughing 800,000 government employees in the process.  Like a petulant 3 year-old throwing a tantrum, Trump makes the entire country – PLUS other countries we have partnerships with – suffer needlessly.

Trump finally caves when Pelosi refuses to give in to his demands and good sense ultimately prevails.

But we are most certainly not out of the woods yet.  Our Ill-Tempered Brat-In-Chief will most certainly try this again.  He will (actually did) create a crisis so as to declare an emergency in order to re-appropriate (mis-appropriate) funds for his ill-conceived border barrier (no longer calling it a wall).

Let’s look at some actual Border Barrier (Wall) details and facts, shall we?

These are Trump’s hot-button issues surrounding our southern border.

First of all, without a literal human chain of Border Patrol agents on the north side of any barrier, a ladder very easily circumvents ANY border barrier.  In point of fact, there is a long (and probably growing) list of techniques that have historically made a southern border wall ineffective:

Probably some other clever ideas I haven’t even considered yet.

And Trump is trying to convince us a contiguous barrier across the entire 1,989 miles of our southern border will be a paltry $5.7 BILLION.

Bullshit.  It is guaranteed to cost a LOT more than that.  And there are some serious obstacles to this project.  Read this article on the topic.

Article reproduced on our page for your convenience.

Let’s take a look at the countries that currently have border barriers, shall we? 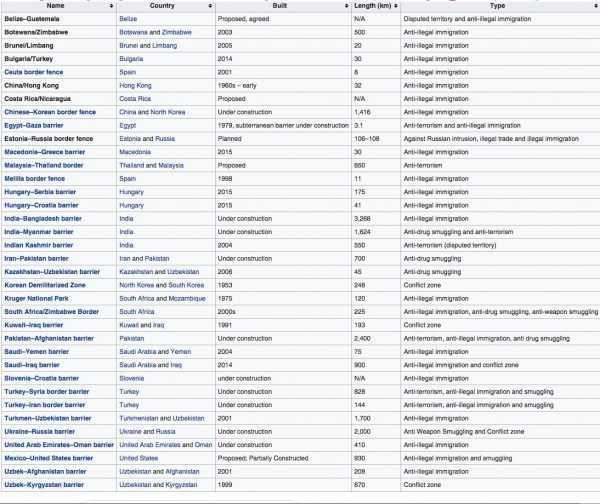 There are only 36 entries in the list, which amounts to a paltry 29 countries (if you factor multiple zones per country), one of which is the US.

Almost all of these barriers have been erected since 2,000.  What does that tell you?

I’ll give you a minute to think about that.

Now analyzing this list, can you find any country you think the United States should want to emulate?

Again, I’ll give you a minute to read the list and think about that.

Did I mention that during previous administrations, our representatives crafted bills to increase border security?

Did you know that in at least two separate cases, the Republican controlled House of Congress failed to take up both of these Senate approved bills?  That’s right.  In 2006 under George W. Bush and again in 2013 under President Obama, significant bills to improve our border security were penned and passed by the Senate and allowed to die in the House.

The 2006 bill cost estimates are here.

So what do you think of this Trump-A-Licious Border Wall now, kiddies?

Think we can really have border security for a paltry $5.7 Billion?  You really need to read this article to understand why it’s not feasible and we should spend that money on infrastructure, veterans or something else that would actually be productive.

Most illegal immigration in the US stems from overstayed visas.  People who entered the country legally and overstayed their visas.

Mexican immigration has been steadily declining, most likely due to ICE rounding up people en masse and deporting / jailing them.

The vast majority of undocumented (illegal) immigrants in this country are hard-working people trying to make a better life for themselves.

The crime rate for illegal immigrants is significantly less than for US citizens in general.

(Mexican) Illegal immigrants are NOT taking away jobs from US citizens.  How many US born citizens do you know that are going to harvest crops, mow lawns or clean houses for the amount of money they get under the same conditions?  Seriously.  How many?  I say this because the current focus is on our southern border.

A southern border wall would be less than 10% of our entire international border expanse (right around 25,000 miles in total).  Even if we put up a solid 50 foot high, 20 foot wide border wall with razor wire, klieg lights and machine gun turrets across the entire expanse of the US / Mexico border, that would leave approximately 23,000 unsecured miles of US border for “illegals” to gain entrance through.

For the most part, drugs entering the country from our southern border are not coming in across open border areas.  The majority are smuggled in via ground, air or water transportation.  We will see an increase in drone delivery across this area, but a wall is not going to stop any of these methods.