Home »Rants»Gun Control and the United States of America

With every new mass shooting the hew and cry kicks in. 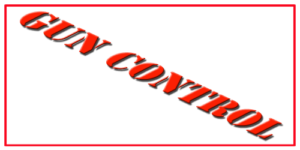 You are never getting rid of guns in this country.  You will never put that genie back in the bottle.  It is part of our DNA as a country and always will be.  It would be nice to live in a world without guns.  But.  And this is a mighty big BUT…  The bad guys will ALWAYS have guns.  You make them illegal.  You put firearm manufacturers out of business.  Remember Prohibition?  It created underground distilleries – and The Mafia.  Make firearms illegal and machine shops will pop up in every 10th garage in the country, turning out custom machined guns.  Mark my word, this is exactly the result of an all-out firearm ban.  After all the bloodshed around the confiscation of these guns.

And… the NRA needs to get a grip.  Their inflexible stance on any kind of realistic firearm control legislation is out of sync with what is best for this country.  Period.  They have done a lot of good with teaching kids firearm safety and making marksmen (and women) out of a lot of kids.  I am one of the results.  My entire life (over 6 decades) there have been loaded firearms in the house and no one has been shot as a result.

We actually have a fair amount of firearm legislation on the books. It does not currently work and has failed us miserably on too many occasions.  The best example is the poster boy wack job what shot Gabby Giffords.  One look at him and you know he’s nuts.  The first gun store he went to had a bright person behind the counter who realized this and sent him packing.  Then he flagged this joker in the registry so no one else would sell to him.  The next guy either missed this, the information was not propagated, or he didn’t care and sold our home grown wack job a 9 millimeter.  The rest is history.

One common thread among most mass shooters is that they have been on psychotropic drugs for some time.  When these events take place is frequently during a period they have gone off their meds.  For some reason they are not being monitored regularly – and anyone who is on psychotropics should be closely monitored.  This is a requirement if you are taking Class II prescription pain medication.  You have to be seen every 2 months and a blood test is mandatory.

Up until recently there was no easy way to monitor these people and their blood levels of pharmaceuticals.  Thanks to Dexcom, that may be changing.  You may have seen the ads on TV for the Dexcom G5 blood glucose monitor.  It is wireless and reads the blood glucose level from an implanted sensor.  If we can do this with blood glucose we should be able to build a sensor for any chemical substance.

When you start a patient on psychotropics, two things should happen.

That right there should solve some problems.

We need gun control.  As I mentioned above, we have a lot of gun control already.  At least in most states.  There’s always Nevada and really everyone should not be allowed to carry a firearm anywhere they want.  This should apply to every state.  A national firearm registration database would be smart.  It requires a computer system that actually works in real time and is nationwide.  It seems to me that in 2018 that should not be all that complicated.  It will be expensive, but not complicated.  It needs to be tied to a mental health database to solve the problem of unstable people getting guns.  The gun show loophole needs to be closed, though.

Chicago is a great example of gun control failing.  Chicago is famous for a number of things.  Pizza comes to mind immediately.  But so does Murder.  They routinely have more firearm related homicides than any other city.  They also have the most Draconian gun laws on the books.  They doesn’t work.  Criminals by definition don’t care about laws.  They ignore them – even flaunt their disrespect for the law while carrying out their illegal activities.  Law abiding citizens who obey the laws just become instant victims.

I like this analogy:  If your kid hits someone with a stick what do you do?

Taking away all the sticks is a fool’s errand.  There will always be more sticks.  One kid misbehaves and we penalize all children as a result.  This is pure foolishness and minimizes the responsibility of the person who behaves in an antisocial manner.  If you take away your kid’s stick and evaluate what caused him to hit the other kid in the first place, you are headed in the right direction.

Ban all automatic weapons.  That is pretty much the case already.  Under certain circumstances you can buy a fully automatic weapon.  They are considerably more expensive than other firearms and require a federal license for each firearm.  That license has to be renewed annually.  It is complicated, expensive and designed to discourage ownership of these weapons.  I am fairly certain full auto weapons have never been involved with mass shootings by home grown terrorists.  Full auto (or selective fire) means as long as you hold down the trigger, bullets continue to fly out the barrel.  At least until you run out of bullets or the action jams (common).

Ban assault rifles.  The term “assault rifle” was cooked up by the left wing to enact the assault weapon ban.  It was in place for ten years along with a high capacity magazine ban.  History shows it accomplished exactly nothing.  The vast majority of firearm murders are accomplished with handguns.  Anyone who says “nobody needs an AR-15” has never fired one.  They are fun to shoot.  They look scary, which is what most people want to legislate against and what was used in the assault weapons ban.  That is ridiculous.  They are semi-auto.  You have to pull the trigger each time you want a bullet to come out the barrel.  If there was such a thing as an “assault weapon” it would most assuredly be selective fire / full auto.  None of the banned weapons fit this classification.  Many hunting and sports rifles are semi-auto.  Someone proficient with a pump action or lever action rifle can fire it as fast as a semi-auto.

Ban high capacity magazines.  Do you have any idea how fast someone can change a magazine if they have spent any time practicing?  Seconds.  Literally seconds.  This is factually a non issue.

Ban bumpstocks.  Hell yes!  That never should have been a thing in the first place.  Any elected representative who allowed these things on the market should be sued by the families of the Las Vegas massacre victims.  It is patently absurd that this product ever made it to market.  Anything that makes a semi-automatic rifle effectively full auto should be illegal.  Period.

All this means to criminals and crazy people is “Open Season“, or more literally a “Target Rich Opportunity“. If you are a bad guy intent on shooting as many innocents as possible are you going to a gun store or police station where everyone is armed?  Not likely.  You are going someplace where weapons are prohibited.  But wait!  You’ve broken the law by taking a gun into a gun-free zone.  Here’s the deal…  You don’t care.  You’re a bad guy.  Laws mean nothing to you.  You have a plan and no silly little law is going to interfere with carrying out your plan.

Schools by definition are gun-free zones.  Israel has a remarkable track record when it comes to keeping school children safe.  We could implement some of their procedures and save some lives.  But…  “We shouldn’t have to do that!” is the response.  OK.

The world has changed.

And it’s not the damned guns that have changed.  They are the same.

We are in a world where stress levels have gone steadily up over the last couple of decades and this contributes to otherwise functional and relatively sane humans snapping.  Like putting too many rats in one cage where then start to eat each other, our species reacts to overcrowding as well.  In recent years, population density has gone up significantly.  Combine that with a 24 hour news cycle of negativity, bias and inflammatory statements and you have people losing it.  And these people can get guns.

In China they use knives.  They kill a lot of people with knives.

Our social media feeds and 24 hour news cycle have caused as many problems as they have solved.  Well, probably caused a lot more than they have solved if you do the math.

Here in the United States, for the last 50 years we thought we had solved the racial bias issue.  We legislated against it and it looked like everything was good.  At least if you were White it looked pretty good.  In the immortal words of Jacque Clouseau:  “Not any more!”  This last election cycle showed us how very wrong we had been.  All of a sudden the closet racists felt emboldened – even justified in their hatred of all people not them.  And now they’re speaking out about it.

So what we have learned is that we never solved the bigotry issue in this country.  What we did was make it so unpopular to be a bigot that all the bigots kept it to themselves – or between them and their ilk (probably some secret handshake determines who you can discuss your bigotry with).

Back to the schools issue.  In Israel, some teachers (by no means all) are armed and it’s not public information.  Everyone doesn’t know who is armed.  But in Israel, everyone serves in the military, so this is a very different situation.  Like here in The States, there are people who have the right training and temperament to be armed and those who would be wrong for this responsibility.  In Israel they also have armed guards at every school and no one gets into a school without being searched thoroughly.  Since they are dealing with international terrorism they have implemented barriers and razor wire too.  They also drill the kids on how to react to an active shooter situation.

Barricade and fight back.

Your odds of survival go way up if you wait for the killer to reload and attack the sonovabitch with whatever you can get your hands on.  If you just hide and hope he won’t find you, your odds go way down.  As simple as that.

But…  “We shouldn’t have to do that!” is the response.