Home »News»Misguided is the Correct Term

Misguided to be sure.

It’s my nature to be skeptical.  This characteristic is a component of the skill-set that made me a good investigator for so many years.  So naturally, when I see some meme or posting that appears outrageous, implausible or just downright inflammatory, I research it.  This procedure takes all of about 60 seconds, as I jump to a different browser, open up a new tab and Google a key phrase in the Asinine Meme Du Jour (AMDJ). 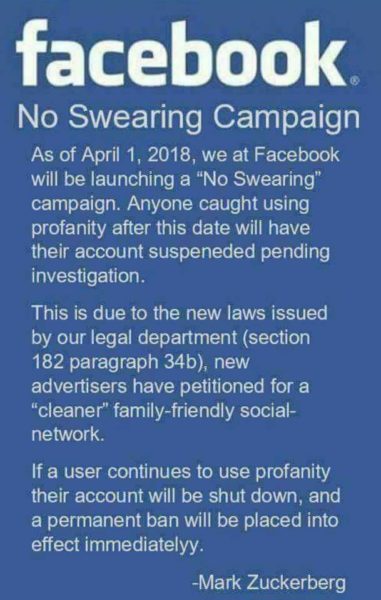 They posted this bit of nonsense.

As of April 1, 2018, we at Facebook will be launching a “No Swearing” campaign.  Anyone caught using profanity after this date will have their account suspeneded (sic) pending investigation.

This is due to the new laws issued by our legal department (section 182 paragraph 34b), new advertisers have petitioned for a “cleaner” family-friendly social-network. (entire sentence structure is wrong)

If a user continues to use profanity their account will be shut down, and a permanent ban will be placed into effect immediatelyy (sic)

This cleverly crafted bit of scareware originally appeared 3 years ago and actually just rehashes a very poorly crafted (and shorter) version that first appeared in 2014.  In the first edition, Campaign was spelled wrong.

About this time of year – every year – someone revamps this bit of trash and trots it out again.  You’d think they would correct the grammar and typos, but that would require a firm grasp of the English language, which apparently they lack.  And that’s an entirely different topic.

As I’ve been saying since 1995 or so, “Before you select Send, Post or Reply, STOP – and think about whether or not this will make you look STUPID – and if you would like the entire world to know this in a matter of seconds.  Remember:  Nothing ever leaves the Internet.  Once it is posted, it is there forever.