Every dog has a story

This is the story of Slick.The.Dog 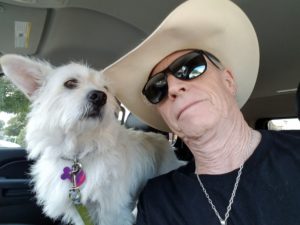 We were on a little trip back to Northern California (where it all started).  We has spent several days in Silicon Valley with my son and went back to SFO (San Francisco Airport) to pick up our rental car for the rest of our time in Mendocino and nearby places of interest.  The road to Mendocino from inland involves a long stretch of Highway 129 from Cloverdale.  The last time we made this tip (19 years previous) we had been driving a 1997 Mustang GT convertible.  The idea of slogging along this amazing road in a garden-variety Nissan or Toyota was not exactly exciting.

Well…  The agent handed us a key and pointed us down the row.  We came upon a gorgeous white Mercedes SLK 300!  It was perfect.  Except for the little detail of not being able to have the top down while our suitcase (fairly large) as in the trunk.  But that’s a small price to pay for driving this little car over an hour of world-class winding roads and hairpin turns.  The 9-speed transmission is almost as much fun as a stick shift. 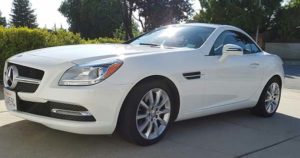 On to the story.

For my entire life and Karen’s life with me, we have had cats.  We have not had a dog together.  Karen has been wanting one for years.  A little buddy whose life would revolve around her.  I have been against it, as we have had the advantage of doing pretty much whatever we want without having to worry about getting back home for “the dog.”  At the time (as now) we had 2 cats and a stable environment – and I liked it that way. 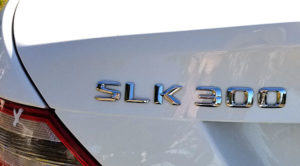 On the way back from Mendocino, the conversation went to the “I really want a dog” area I had been trying to avoid for years.  I finally caved under the enormous pressure my bride is so capable of bringing to bear.  I said “OK – but whatever side effects come with a dog are on you.”  I thought she was going to burst with joy.  On the drive she as searching back home for a new critter (when we had signal) and the discussion drifted to what name would we give our new housepest.  I thought about some of her suggestions and said.  Well, since we are driving an SLK, I think his name should be Slick.

So before we had the dog, we already had the name.  And it suits him perfectly.  Everyone who meets him says that.

Two days after we got back home to Dallas, we were off to Operation Kindness in Carrollton where Karen had found our new little rascal and was absolutely positive that if we didn’t get over there quick fast like a bunny, someone else was going to snap him up.  Upon being introduced to “Barksley”** (the name assigned to him) I was convinced she was right.  It was love at first sight for Karen.  I am more of a skeptic with a wait-and-see approach.  And after a lot of paperwork and exchange of some serious cash, we were off with our new housecritter.

Even though the initial couple of months were pretty wild, he has become an excellent member of our family and brings us as much joy as we bring him.  Every time we come home, he is on the other side of the Critter Gate (I had to build to keep him from devouring the cat’s food).  He is so excited he can hardly stand it and in full wag.  Then he dashes off to find one of his toys and bring it back to us before we get to the gate.  Slick is the #WorldsCutestDog and then some.

BTW:  If you don’t know by now, if you shop at Amazon, you can switch to smile.amazon.com and part of your purchases will go to the charity of your choice.  I give to Operation Kindness.  They are a no-kill shelter and do a lot of good for critters in our part of the world.  I volunteer there now.  Two of our housecritters and from Operation Kindness and all are rescues.

**  About 15 seconds after we got our new housecritter home, we figured out why his name had been Barksley.  He came in the house at full BARK.  We had about 3 weeks of NOTHING BUT BARKING.  The cats immediately retreated to the Observation Deck (7 feet off the floor at the top of their Kat Kondo) and glared at everyone (especially me).  To say they were nonplussed would be an extreme understatement.  It seems Slick is part Corgi and Terrier – and wants to herd everything.  Especially cats.  The cats HATE this.  They had a nice, quiet house and liked it that way.  We discovered a mix of distilled water and white vinegar in a squirt bottle is an excellent deterrent to bad behavior for critters in general.  I keep a bottle of this around to clean the big screen TV, so it was accessible and turned out to be perfect.  Slick responded to it quickly.  He hates the smell, but it doesn’t hurt him (avoid spraying vinegar in anyone’s eyes.  It hurts.)  He smells like a salad for a few minutes, then it evaporates.  A roughly 50-50 mix seems to work best.  I tried a lower dilution and it had little effect.

Slick was a “surrender.”   He was estimated to be 3 years old when surrendered.  As nearly as we can tell, the little guy had never been socialized.  He would go completely batsh!t barking non-stop for any number of reasons:

We walk him a lot and have learned that in most cases, if we let him get close to other dogs he will make friends of them.   At the dog park he does pretty well until he finds a dog he want to herd and then he just will.not.stop barking until said dog starts running so Slick can herd it.  Then it’s time to go home.  He does not like large dogs and will go after them.  He’s put on weight.  He was 18 lbs when we got him and he’s up to 24 lbs now.  He gets a 1.2 mile walk in the morning and .75 mile walk in the evening.  He’s happy and healthy and has gotten much better with other dogs.

About 2-3 months ago on our evening walk, he went into full BARK mode for over a block on 3 different occasions at other dogs on the same street.  I was  completely exhausted when we got back and determined to find a way to break this bad habit.  When he goes FULL BARK, he sees red.  He cannot be stopped or communicated with.  But when we got back from this walk, I had an A-HA moment.  Now we walk him with the vinegar spray bottle.  When he goes off, I squirt him right smack in the butt.  That breaks his concentration.  Since that time, we have had very peaceful walks for the most part.  He has made lots of new (dog) friends an no longer reacts to bicycles, kids or trucks.  This is an incredible improvement.  #WorldsCutestDog

Not long after we got the little rascal we noticed he was scratching a lot, so we took him to see the nice doctor man.   After examining Slick briefly he told us he has seborrhea, which is not uncommon in (one of) his breed(s).  It’s due to the fact that his skin is oily.  This also explains why he smells “doggie” only 3 days or so after a bath.  So…  Slickers gets a bath every week.  We usually bathe him ourselves in the tub.  He’s really good about it and races through the house like CRAZYDOG after we fluff him up nicely with towels and blow him dry.  It’s pretty funny.

And the latest update:

Slick.The.Dog has his own social media accounts.

We use a medicated shampoo the vet recommended that we get from Amazon.  But.  We mix in some Blue Dawn to boost the oil cutting power.  This works GREAT.  It also does not dry out his skin and has flea repellent qualities.  Look up Blue Dawn applications sometime and you will be amazed at what you can use it for.

Walking your dog in the heat

Here’s a little something I recently learned.  Here in Texas (and increasingly in other areas) it gets pretty hot, especially in summer months.  Did you know that when the air temperature is 89 degrees that the sidewalk can be as high as 130+?  Yesterday as an example, I measured the sidewalk at 136 degrees and the black (composite plastic substance) water meter cover at 156.  The air temperature was 89 and the heat index was only 93.   Asphalt is hotter than concrete, (because it is a darker color) as is exposed aggregate.  The rocks seem to absorb a lot more solar energy.  When I measured the sidewalk at 136 degrees, an area in shade in front of the next house was only 83.  This serves to illustrate the impact our sun has on surface temperature.

I use an infrared laser-aimed thermometer to be sure whether we should take our little guy off the grass or not.  This one from Etekcity works great and is a lot less $$$ than the last one I bought.  I can easily recommend it:

At a surface temp of 125 degrees, your dog will burn it’s feet.  This was recently brought to my attention by a friend of mine who is a K-9 officer.

Even when the surface temperature is lower than 120,  the heat index can be deadly for furry people.  The heat index in the last week was as high as 120.  Naturally, since your dog is covered in fur (and some are pretty thick) you need to consider basic overheating as an issue.  You should always have water for your dog on daytime walks.

We have started moving our evening walk to after dinner when the sun is not on the sidewalks.  We also try to keep to the shady parts of streets.

You can get booties for your woofie that will protect its feet from heat, cold, burrs and other dangers.  It will take a little time before it stops walking like John Cleese in Monty Python’s Ministry of Silly Walks skit, but it may be the best idea.

Also, there are compact water dispensing bottles for your critter that you should carry with you when the temperatures soar.  We love ours and Slick figured out how to use it immediately.  They come in larger sizes + a variety of colors and are easy to operate.

And if you have a dog – and you ever walk them anywhere… You will need lots and lots of poop bags.

Because only a$$holes don’t pick up after their dogs, right?

And you don’t want to be one of those, do you?

Never mind the possibility of someone with a surveillance camera recording you NOT picking up after your dog and returning what you didn’t pick up to your mailbox maybe… Right?

Ever think of that?

The odds get better all the time with cameras everywhere.

So do the right thing and pick up after your critter.

And this is the best deal on the planet for said bags: