The recent revelations regarding leaked tapes of Donald Trump making lewd, insulting comments about women, his daughter and his celebrity status have saturated the news cycle for long enough to create some very ugly reactions.
Every other (sometimes more) post this morning has everybody and their dog (except our dog – he knows better) posting offensive things Bill or Hillary did – or said in the past – which somehow justifies Trump’s misogynistic, boorish and far-from-presidential behavior.
You realize this is like saying “Oh yeah!? So’s your mom!” right?
Did none of you evolve past 6th grade?
This is the very definition of cognitive dissonance.
Also… hypocrisy
<feel free to Google both if these don’t sound familiar to you>
You simply cannot intelligently justify the bad behavior of your favorite politician by the bad behavior of the one you hate. Have you never heard the phrase “Two wrongs don’t make a right.” (but three lefts do…)?
Using this kind of “justification” just makes you look small-minded and stupid. If you want to be taken seriously by even semi-intelligent people you cannot behave like this.

Along the same lines, this would be like the following scenario:

I come racing through your neighborhood in a big Chevy truck like a lunatic, plow through your fence, run down and kill your dog, barrel down the street and off into the distance leaving a trail of destruction in my path.
Next Friday night in your (little) mind, this justifies you doing exactly the same thing to a total stranger on the next block.
Do you see the problem with this logic? 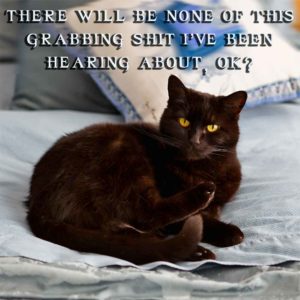 The gene pool clearly needs a lot of chlorine.
Oh…
And lest anyone decide this is an endorsement of either candidate… It’s not.
This election is the most embarrassing “choice” we have ever had to make in the history of this country.
We should all be ashamed that we can’t do better than this. We have on one hand a candidate most people dislike and distrust. On the other hand we have a candidate who has failed more times than succeeded, who makes a habit of offending as many sub-classes of citizens as possible and clearly feels above the law of our great land.

Neither is acceptable in my opinion.

No matter how you feel about both of our very poor options, you have to ask yourself one very important question:
“Which of these candidates puts forth the more professional, polished, moderate image which will cement our position on the world political stage?”
<as opposed to torpedoing this image for perhaps eight very long years.>
Then go out and cast your VOTE!