Home »Instructional»Ahmed’s Clock is NOT an Invention

Unless you live in a cave (in which case you’re not reading this) you have been at least aware, if not following the media circus surrounding 14 year old Ahmed Mohamed from Irving Texas. To recap, the story is that Ahmed “invented” a clock and brought it to school to impress his teacher(s).

This is as far from an “INVENTION” as you can get, actually.

Let’s get into this supposed clock that Ahmed “invented”…

Assuming the photo being circulated is accurate:

Regardless of his intentions, which I am not going to get into right this second, the photograph of said “clock” has been making the rounds on the Internet and more than one expert has taken issue with Ahmed’s purported inventiveness. In this post I am going to take issue with Ahmed’s “Invention”.

In the photo, which you can click on to enlarge, I have circled and labeled the components and their functions. I have enhanced this image to make shadow details more evident. We will take this in order from the top of the photo to the bottom.

Now to apply some logic to this information. 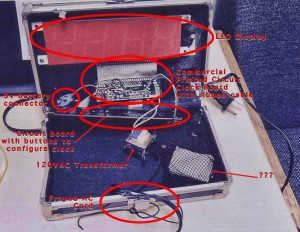 Ahmed invented nothing. This is very simply a commercially available clock or timer with a large display. It was unceremoniously ripped from its plastic housing and slapped into a pencil box. No attempt was made to make the innards even look finished. It is a repurposed clock. It is not even cleverly repurposed, as it would have been had it been disassembled and installed in a lucite box, for instance, with all the inner workings visible. That, at least would have been artistic and semi-educational. This is none of these things.

At a minimum, a “brilliant” person would have screwed down the transformer to keep it from banging around inside the case and damaging a circuit board.

With a hacksaw, he could have sawed a small notch into the side of the case so the power cord could exit the case without being crushed. Clearly this was of no concern.

I am fairly confident my 6 year old grandson could have accomplished exactly what is pictured here with a little adult supervision. Nothing about this is brilliant. Period.

In my humble opinion, Ahmed is being used as a pawn for some political purpose. Everyone fell for it, hook, line and alarm clock – including our President, who has invited this charlatan to the White House. This kid may be a genius. He may be brilliant. This box of electronics proves neither. This clearly was designed to look like something to be afraid of and it eventually accomplished exactly that. Why? This is what we need to know.

If he wanted it to really look like an IED, he would have picked up a block of kid’s putty at the local hobby store, stuck a couple of wires into it and stuffed it into the box along with everything else. Not including this final bit of the puzzle left him with lots of plausible deniability.

Initially I was inclined to believe the media dialog, because there was nothing in this box that could be construed as explosives (anyone who has ever watched NCIS can probably figure that out). But on further evaluation of this photo, I no longer believe any of the nonsense trotted out before the media. I firmly believe the authorities in Irving, Texas were right to detain and question this boy. He and his family are up to something here. Now we will have to wait to find out their exact intentions. That is not my job.

And for those who seem intent on criticizing this post, I say “prove me wrong.” Give me the box with a verifiable chain of evidence and I will go over it with a fine tooth comb. In citing my credentials below, I am not trying to indicate my superiority to a 14 year old, but rather pointing out my credentials to debunk this topic.

What are my qualifications for making this analysis?

At the age of ten, a Ham radio operator next door got me interested in electronics. Prior to that, chemistry had been my primary interest and I had a fairly decent lab built in an alcove in our garage. I began ordering Allied Radio kits and building a variety of projects to learn how DC and AC circuits worked. In 1960, the youngest you could test for and acquire a Ham radio license was 14 and by that time I was, indeed studying for my license while listening to transmissions from around the world. At the age of 14, I hand-built a 15KV Jacob’s Ladder, which I would later on use to light cigarettes (before I got smart and quit that nasty habit). I continued to study electronics throughout school and majored in electronics in college. I had plenty of contemporaries who were doing similar things. Were they geniuses? I don’t know. All I know is building things was common.

In 1973-74 I ran JBL’s electronics assembly line, producing their Professional amplifiers, mixers and active crossovers before I went to Motown Records as a studio engineer. In addition to keeping the studio running in top condition, we custom built any number of different devices for the studio and Berry Gordy personally. I had the good fortune to work with some NASA trained wiring women when upgrading the studio and acquired some invaluable techniques I would employ later on.

Moving back to the Bay Area in late 1975, I founded Precision Technical Services. I designed, built and repaired custom electronics for the recording / music industry for many years. From 1981-83 I worked on the first computerized home in Tiburon, CA. We custom designed all the computer interface and built these products from scratch. I still have the documentation. I personally wired several entire studios between 1975 and 1992, when I went to work for Symantec.

Along with Stan Axelrod, I established the service and repair facility at Bananas at Large in San Rafael, CA. Eventually we took the service facility out and set up AudioCraft Engineering in Ignacio, CA where we serviced most of the pro audio equipment on the West Coast for several years. The number of precision soldered connections I have made is very simply innumerable.