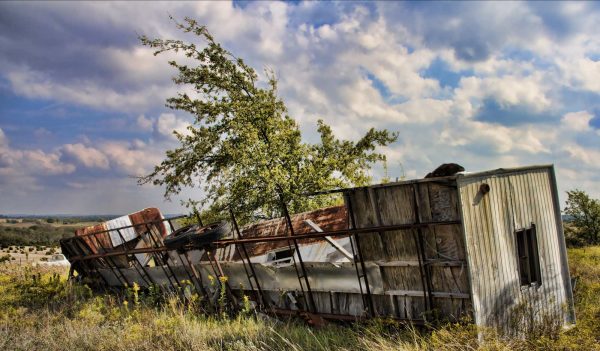 OK, are anyone else’s prayers going unanswered? I only ask because I’ve noticed a conspicuous shortage of natural disasters of late. As usual, I read the newspaper today, but one noticeable difference leapt out at me. There wasn’t even one account of a mobile home skewered by a telephone pole, floating lazily down a storm-flooded river, tossed end-over-end for a country mile or microwaved to a golden brown (silver) by a well-placed lightning bolt.

Not that this is necessarily a bad thing, of course, but according to my past observations this could mean that God is taking a vacation, and as a result, may not be answering prayers as well. This is actually good news for mobile home dwellers, since they usually seem to bear the brunt of His wrath.

That’s right, I’m suggesting that God hates mobile homes. How did I come up with this concept, you may ask? Well the evidence seems pretty compelling, based on Mother Nature’s track record, that God actually hates mobile homes and is making a sporadic, yet determined effort to wipe them out, bringing His entire arsenal into play. He doesn’t seem to pursue this pet project on a full-time basis, though. Perhaps He’s just distracted by more pressing matters from time to time, like our constant international squabbling and destruction of our atmosphere, and it takes awhile to get back to the “cleansing of the landscape.”

Think about it – whenever a natural disaster strikes, what can you be sure to see? Trashed mobile home parks. Mobile homes in trees. Mobile homes (singular) spread over unusually large expanses of real estate. In most cases it appears that a giant-sized infant had one doozy of a temper tantrum and threw all his toys as far and as hard as possible.

And why not? Let’s look at if from another (more distant) perspective. OK, you’re God and you’ve just finished creating the Universe and down on Earth, a beautiful green, lush planet, you’ve created an experiment (us) and you check in from time to time just to see how we’re taking care of your investment. One day you look down and notice something ugly – and it’s moving. Upon closer inspection it appears to be some kind of metal contraption on wheels being towed by another of our little inventions. You think maybe it was a mistake of some kind and we’re towing it away to destroy it, so you continue to observe. As it comes to the end of its journey you are horrified to see it’s not being towed away for demolition at all, but rather to join dozens more of equally unattractive little metal ‘horrors’ – and it seems people are actually living in them. Before long they’re springing up all over the Earth like a plague of locusts (which is starting to sound like a really good idea right about now). What do you do? You can’t ignore it, because it’s sort of like a rusted-out Edsel parked on your lawn in a high rent neighborhood – it irritates the living hell out of you on a daily basis – and besides – neighbors (from other planets) can see this crap in your yard too (how embarrassing), so it’s not just you that has to put up with this eyesore, it’s a cosmic disgrace! You could always just have another “flood” and clean the whole mess up again, but you “promised” not to do that (drat!). However… You never said anything about occasional ‘yard work’ in that contract, so that leaves some other less thorough options. 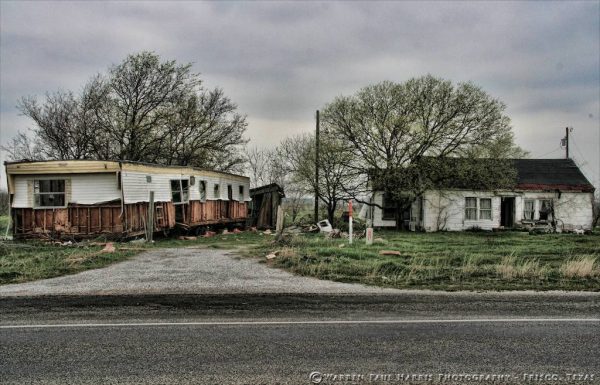 Lightning, Tornadoes, Hurricanes, Floods, Earthquakes – these all work on a spot-removal sort of principal. They all take out mobile homes like a heaven-sent leafblower – and it’s kind of fun to watch. It’s actually quite impressive how far a mobile home can be launched by Mother Nature. A mobile home impaled on a tree is actually a fairly comical sight, provided you’re not inside it at the time. OK, maybe I’ve got a warped sense of humor – but it’s all mine, and it’s not stuck in a tree. And as long as we’re going to appreciate out-of-context art, a mobile home floating down a river is a fairly amusing sight as well, to say nothing of one teetering on the edge of a crevasse recently created by a nice punchy 7.5 earthquake. I’m partial to the sight of several mobile homes all clumped together after tangling with one of those highly effective Midwest twisters, myself.

I remain convinced that this is God’s effort to wipe this revolting aluminum blight from the face of the earth, and the only reason anything else is ever damaged is because it just happens to be in the line of fire (sometimes I think God takes the shotgun approach). After all, wiping out a nursery school or a hospital is a small price to pay in the overall scheme of things if one more mobile home park is nuked in the process, isn’t it?

This isn’t really a discussion on theology or philosophy and I’m no theologian, but here’s a little free advice: If you want to avoid catastrophe, stay away from mobile homes. If you live near one – move! And if you own one, do the rest of us a favor and move it to Siberia.